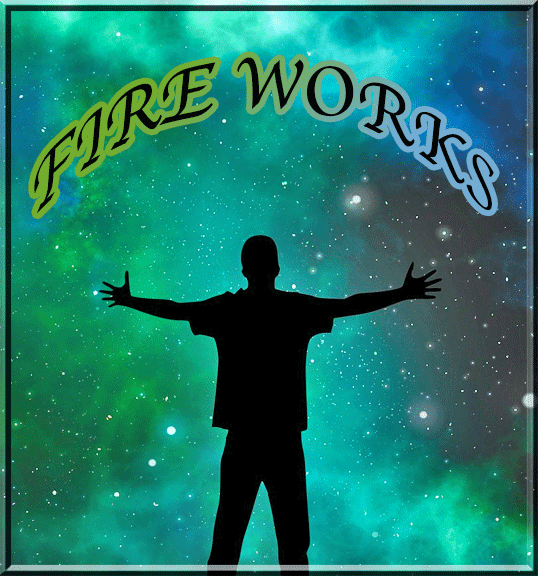 Every year we are drawn to celebrate our country with exploding displays of fireworks.  In 2016, eight hundred million dollars were spent for fireworks alone.
Anna Daisy experiences a different kind of celebration on July the fourth when she lived on Central Kansas farm as a young girl. After the day of harvesting wheat was over, and the kitchen once again clean, she and her older sister climbed to the top of the chicken house.  This was the best location to view the fireworks display in the small town nearby.
“By the rocket’s red glare’ played before their eyes.  When the colorful display ended, they could hear the popping of firecrackers in the distance.  They climbed down again.  Suddenly a moving light in the sky caught Anna’s eyes. She stopped and watched a shooting star seemed to streak across the velvet, darkened sky.
Man-made lights are just for a while, but the stars and the moon are every night, Anna realized.  Each evening Anna kneeled at her window and watched for the first star to appear.  The evening star became her friend.  A friend to whom she could tell her hopes and dreams.
Years later, we sat on the small back porch steps at dusk, and Mom shared her Star Friend with me as we watched for its appearance. Since July 4th was also Mom’s birthday, we began taking our four small children to celebrate her birthday. Our children were introduced to sparklers, as we watched the sky for fireworks. (The sparkler-sticks of sputtering light were safer and cost less.)
We are drawn to the lights in the sky. Genesis 1:15-17 – God made two great lights—the larger one to govern the day, and the smaller one to govern the night. He also made the stars. God set these lights in the sky to light the earth, to govern the day and night, and to separate the light from the darkness. And God saw that it was good.
Psalm 136:5-7 – Give thanks to Him who made the heavens so skillfully. His faithful love endures forever. Give thanks to Him who placed the earth among the waters. His faithful love endures forever. Give thanks to Him who made the heavenly lights—His faithful love endures forever.
I Corinthians 15:40-41 – There are also bodies in the heavens and bodies on the earth. The glory of the heavenly bodies is different from the glory of the earthly bodies. The sun has one kind of glory, while the moon and stars each have another kind. And even the stars differ from each other in their glory.
The last verse of Mom’s poem includes these words: But when our idol-fires fade. We see a clearer sight, Of God’s spectacular display, Through ageless stars of dark nights.
Fireworks are temporary and God’s lights, the Sun, Moon, and Stars light our world in a steadfast way – and point to the forever Light of the World. Matthew 2:1-2 – Jesus was born in Bethlehem in Judea, during the reign of King Herod. About that time some wise men from eastern lands arrived in Jerusalem, asking, “Where is the newborn king of the Jews? We saw His star as it rose, and we have come to worship Him.
Suddenly the word, His, blazes across my mind like a banner. The Star of Bethlehem was not just any old star showing the way to where the Baby Jesus lay, it is the star that belongs to Jesus. Then the scripture in John 8:12 speaks more clearly – Jesus spoke to the people once more and said, “I am the light of the world. If you follow me, you won’t have to walk in darkness, because you will have the light that leads to life.”
Stars are so many, we cannot count them. Each star has a name and listens to God – ‘All the stars are at my command’.  ‘When I call out the stars, they all appear in order.’
When a painter paints, when a writer writes, when a poet writes a poem, or a musician writes a melody – what do they use for inspiration and subject matter?  The facets of the Creations of God the Father and His Love.

Psalm 19:1-4 –The heavens proclaim the glory of God. The skies display his craftsmanship. Day after day they continue to speak; night after night they make him known. They speak without a sound or word; their voice is never heard. Yet their message has gone throughout the earth, and their words to all the world.

Exploding rockets flare and flash
To decorate the skies
Spectators oh and ah until
The light of splendor dies.


But when our idol-fires fade
We see a clearer sight
Of God’s spectacular display
Through ageless stars of the night.
Anna Daisy Siemens