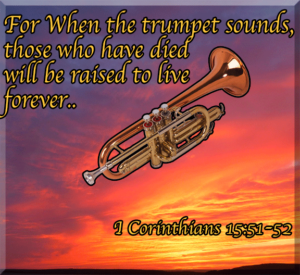 But let me reveal to you a wonderful secret. We will not all die, but we will all be transformed! It will happen in a moment, in the blink of an eye, when the last trumpet is blown. For when the trumpet sounds, those who have died will be raised to live forever. And we who are living will also be transformed. I Corinthians 15:51-52.

No thought of any man through the course of time could have proclaimed the statement you just read in the previous five sentences with any truth.  No one but God Himself.  This is the What, When, and Who.  The missing piece is the Why of Love and the How of Faith!

Earlier in the same chapter, verse 23 – But there is an order to this resurrection: Christ was raised as the first of the harvest; then all who belong to Christ will be raised when He comes back. In verse 28 – Then, when all things are under His authority, the Son will put himself under God’s authority, so that God, who gave his Son authority over all things, will be utterly supreme over everything everywhere.

Have you ever wondered why God goes to such lengths for man, that He would send Jesus to save the world, prepare a home for those who follow Jesus? Hebrews 2:6-7, For in one place the Scriptures say, “What are mere mortals that you should think about them, or a son of man that you should care for him? Yet for a little while you made them a little lower than the angels and crowned them with glory and honor.

Only our Lord God can transform our bodies so that we will never die, and Why?  John 3:16 reads, For God so loved the world that He gave His only begotten Son, that whoever believes in Him should not perish but have everlasting life.

Men search the world over for the fountain of youth – it isn’t in a bottle made by man, but in Christ Jesus, the only Son of God. Listen for the Trumpet!