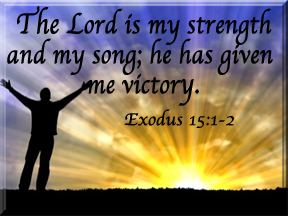 Then Moses and the people of Israel sang this song to the Lord: “I will sing to the Lord,  for he has triumphed gloriously; he has hurled both horse and rider into the sea. The Lord is my strength and my song: He has given me victory. This is my God, and I will praise him–my Father’s God, and I will exalt him! Exodus 15:1-2

Moses lived by faith in God. What does that mean? Hebrews 11:23-25 explains.  It was by faith that Moses’ parents hid him for three months when he was born. They saw that God had given them an unusual child, and they were not afraid to disobey the king’s command. It was by faith Moses, when he grew up, refused to be called the son of Pharaoh’s daughter.  He chose to share the oppression of God’s people instead of enjoying the fleeting pleasures of sin.

And Moses sings? He sings praise to God during the 40 years of walking in the wilderness, leading people who simply complained and forgot the blessings of God.  When he felt anger, Moses lost the pleasure of going into the Promised Land.  Yet, he was faithful! What happened to Moses? Years later, Jesus took Peter, James, and John to the top of a mountain to pray. “And as he was praying, the appearance of his face was transformed, and his clothes became dazzling white.  Suddenly, two men, Moses and Elijah, appeared and began talking with Jesus.”

Having faith in God and His Son, Jesus, on this earth propels us into Presence of God, and Jesus, our Savior.  Listening to the voice of Jesus, and obeying their commandments creates a song of praise and joy in our hearts, no matter what we endure on this earth.  Let it be so! Oh, Lord! Let it be!

It was there at Marah that the Lord set before them the following decree as a standard to test their faithfulness to him. He said, “If you will listen carefully to the voice of the LORD your God and do what is right in his sight, obeying his commands and keeping all his decrees, then I will not make you suffer any of the diseases I sent on the Egyptians; for I am the LORD who heals you.” Exodus 15:25-26