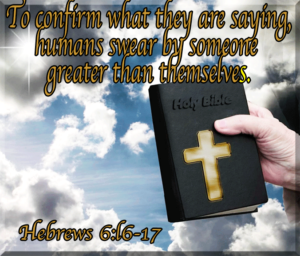 When swearing an oath to confirm what they are saying, humans swear by someone greater than themselves and so bring their arguments to an end. In the same way, when God wanted to confirm His promise as true and unchangeable, He swore an oath to the heirs of that promise. Hebrews 6:l6-17.

How often we wonder who to believe?  In a courtroom we swear on the Bible which contains the Words of God. He has given us two unchanging things, His promise and His oath. It is impossible for God to lie.

What does He promise?  He will never leave us, He has plans for us to prosper, He hears our prayers, He is our strength, He will fight for us, He will give us peace, and He will always love us.   Are these promises true?  Each of us makes that decision.  Hebrews 11 gives list of those who believed – Abel, Enoch, Noah, Abraham, Isaac, Jacob, Joseph, and Moses. and many more.  Their lives were filled with adventure and danger because they believed  God and followed His leading.

The magnificence of the first verse in the Bible tells me about the awesome power of God… In the beginning, God created the heavens and the earth.  John 3:16 gives me hope, and the Why of God’s heart.  “For God so loved the world, that He gave His only Son, that whoever believes in Him should not perish but have eternal life.  For God did not send his Son into the world to condemn the world, but in order that the world might be saved through Him.”

So God has given us two unchanging things: His promise and His oath. These prove that it is impossible for God to lie. As a result, we who come to God for refuge might be encouraged to seize  that hope that is set before us. Hebrews 6:18.