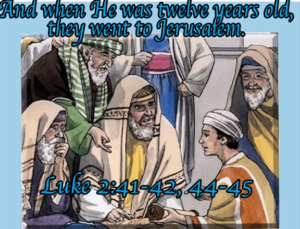 Now His parents went to Jerusalem every year at the Feast of the Passover. And when He was twelve years old, they went up according to custom. but supposing Him to be in the group they went a day’s journey, but then they began to search for Him among their relatives and acquaintances, and when they did not find Him, they returned to Jerusalem, searching for Him. Luke 2:41-42, 44-45.

Any parent whose child is lost knows the angst Joseph and Mary felt when they could not find Jesus in the group with whom they were traveling.  They found him in the temple in Jerusalem, talking with teachers And all who heard Him were amazed at His understanding and His answers. Luke 2:47.

Verse 48 has the words every parent has used or thought with their children. “Son, why have you treated us so? Behold, your father and I have been searching for you in great distress.”  Luke 2:48b.  At the age of twelve, Jesus had a sense of His Identity.  This happens for us at any age when we belong to Jesus.  For as many of you as were baptized into Christ, have put on Christ. Galatians 3:27.   The Lord is my strength and my song; He has become my salvation. Psalm 118:14

Luke 2 begins with the birth of Jesus, and ends with Jesus having, at the age of twelve, with about twenty-eight years before He was baptized by his cousin, John and begins His Ministry.

And Jesus increased in wisdom and in stature and in favor with God and man. Luke 2:42.

And he said to them, “Why were you looking for me? Did you not know that I must be in my Father’s house?”  And they did not understand the saying that he spoke to them.  And he went down with them and came to Nazareth and was submissive to them. And his mother treasured up all these things in her heart. Luke 2:49-51.