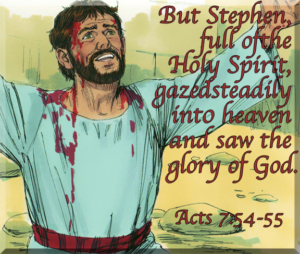 The Jewish leaders were infuriated by Stephen’s accusation, and they shook their fists at him in rage. But Stephen, full of the Holy Spirit, gazed steadily into heaven and saw the glory of God, and he saw Jesus standing in the place of honor at God’s right hand. Acts 7:54-55.

Why does truth cause anger? Stephen reminded the High Priest that Abraham, Isaac Jacob, Joseph, and Moses followed Jehovah’s teaching and the people Moses led from Egypt rebelled against God. Moses is described as ‘a beautiful child in God’s eyes,’ in Acts 7:20.

Stephen saw men shaking their fists at him, and yet he looked steadily into Heaven, he saw the glory of God.  He saw the Son of Man standing in the place of honor, at God’s right hand!   The men who stoned Stephen were angered beyond reason. Stephen simply forgave them as he took his last breath.  Saul (Apostle Paul), condoned this killing, as the angry men laid their coats at his feet.

My Dad died thirty nine years ago and I still wonder and ponder about the smile on his face as he took his last breath.  My Dad died peacefully in the Lord, and I can see in my heart, Stephen’s face reflecting the glory of God. The postscript to Stephen’s death, is the persecution, beginning in Jerusalem. The apostles scattered through Judea and Samaria, telling about Jesus.  Devoted men buried Stephen with great mourning.

Then they put their hands over their ears and began shouting. They rushed at him and dragged him out of the city and began to stone him. His accusers took off their coats and laid them at the feet of a young man named Saul. As they stoned him, Stephen prayed, “Lord Jesus, receive my spirit.” He fell to his knees, shouting, “Lord, don’t charge them with this sin!” And with that, he died. Acts 7:57-60.