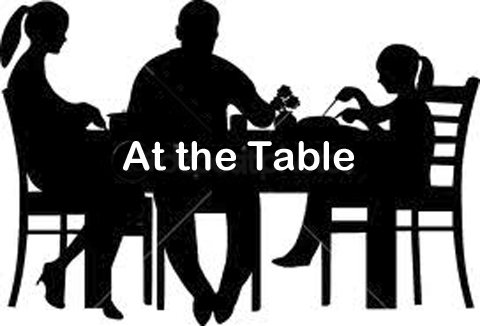 The
phrases, ‘around the table’, ‘come to the table’ and ‘at the table’ have been
used many times.  It signifies the
meaning of unity, those who come together for a single purpose.

My
first memory of a table was in the ‘little house’ in Clinton, OK.  There was a bench against the table to seat
my two brothers.  I am sure Mom built it.
And I sat on a tall ‘flour’ barrel.  This
was in the ‘30’s’ before I knew we were poor.
Every morning, as we watched Mom, like little hungry birds eyeing a
worm, as she stirred Cream of Wheat and added sugar and milk and poured it into
glasses.  My two brothers drank theirs
quickly.  Then held out their glasses for
more.  Mom threatened to push the table
against their tummies, so they wouldn’t need more, saying, “Your tummies will
burst with all that cream of wheat.”
Immediately I pictured our kitchen awash with Cream of Wheat and
wondered how deep it would be.
As
we grew, we acquired a real dining room table with chairs for
entertaining.  It was also good for a
game of ping pong that left scars that didn’t disappear.  Mom refinished the table later with a
beautiful light finish on top, embellished with tiny flowers that she
painted.
History
records all kinds and shapes of tables – square, rectangle, drop-leaf and round
tables, semi circular, folding table, a high table or a low table, a trestle
table a la Walton’s Mountain or a ‘just-right’ table.  The pedestal table had only one central leg.  The tables were made of wood or metal or now,
plastic. The night stand table also appeared as the need arose. I remember the
formica topped table that we had once.
Just right for children and spills.

According
to several things I read, we know more about tables after the 17th
century.  But the shape, size, number of
legs doesn’t matter, it is what happens around the table that counts.  We learned as a family the importance of
‘please’ and ‘thank you’ around the table.
We took our four pre-teen children to see their grandparents.  My Dad decided to treat them to a restaurant
meal where they could order whatever they wished.  When one of our curious boys picked up the
cloth napkin and asked what it was, I could see another opportunity for
learning at the table.  When we returned
home, we instituted a dinner with cloth napkins, formal discussions that took
place while several courses were served and finished.  No scolding, no yelling, no ‘ayva beya’ (bend
over commands) were tolerated and laughter was encouraged.  Afterward we went skating as a family.
Other
tables I have known included Siemens and Suderman family reunions when tables
were loaded with food and the conversation and laughter were abundant. No
matter what the celebration was, being together became the ultimate
celebration.
Tables
are for informal and formal purposes. There was the Round table at which
the  Knights of King Arthur
gathered.  I often wonder what the topic
of conversation was at a table that had no ‘head’.  When a King invited someone to his table, it
was an indication of gathering in and showing favor. 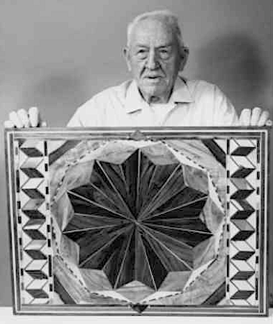 My
husband’s Uncle Gallio had a love for working with wood.  He didn’t see wood as his Dad did, as ax
handles, which John William Combs made at the foot of th Blue Ridge Mountains
in North Carolina.  But Uncle Gallio saw
patterns of color and textures of wood.
In 1966, when he was 91 years old, he completed the table shown here and
won the Blue Ribbon for the Old Timers’ Handcraft Division in Arizona.  He used 7 species of wood from Arizona and 6
species from foreign countries and designed 1600 pieces in this work of
art.  He made other items, headboards,
boxes and tables using wood.  When asked
if he sold these he replied, “Certainly
not.  I believe the fun is NOT in working
for money.  At 91, I don’t need money.”
I
found ninety references in the ESV version of the Bible for table.
The first one is in Genesis 43:34 – Portions were taken to them from Joseph’s table, but Benjamin’s portion was five
times as much as any of theirs. And they drank and were merry with him.
In the New Testament many references are made to
reclining at the table.  The Last Passover
Supper with Jesus’ disciples took place at a table and they reclined.
“Now as they were eating, Jesus took bread, and after
blessing it broke it and gave it to the disciples, and said, “Take,
eat; this is my body.” And he took a cup, and when he had given
thanks he gave it to them, saying, “Drink of it, all of you, for this
is my blood of the covenant, which is poured out for many for
the forgiveness of sins. I tell you I will not drink again of this fruit
of the vine until that day when I drink it new with you in my Father’s
kingdom.”  Matthew 26:26-29
When
I see a table that holds the words, “In
Remembrance of Me”, a table has a different deeper meaning for me.  I see Jesus gathering his disciples for the
last Passover meal.  I see the sorrow and
the impending celebration after the resurrection of Jesus.  I see the promise of gathering around the
table once more with Jesus ‘in my Father’s kingdom’. A table isn’t as important
as what happens around the table.  There
is a Presence each time we sit at a table.
God values the love at the table for all those gathered around the table
and most of all He wants a relationship with those seated.
•  Let the word of
Christ dwell in you richly, teaching and admonishing one another in all wisdom,
singing psalms and hymns and spiritual songs, with thankfulness in your hearts to God. Colossians 3:16
•  Pray without
ceasing, give thanks in all circumstances; for this is the will of God in
Christ Jesus for you. I Thessalonians 5:17-18
•  Anyone
who does not love does
not know God, because God is love. I John 4:8
•  I trust in the
steadfast love of God forever and ever. Psalm 52:8b
•  Give thanks to
the God of gods, for his steadfast love endures forever. Psalm 136:2
•  May the Lord direct
your hearts to the love of God and to the steadfastness of
Christ. II Thessalonians 3:5
• Beloved, let us love one another, for love is from God,
and whoever loves has been
born of God and
knows God.  I John 4:7