That night the secret was revealed to Daniel in a vision. Then 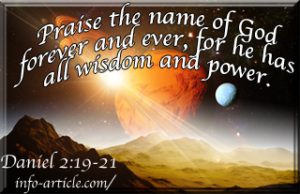 Daniel praised the God of heaven. He said, “Praise the name of God forever and ever, for he has all wisdom and power. He controls the course of world events; he removes kings and sets up other kings. He gives wisdom to the wise and knowledge to the scholars. Daniel 2:19-21

What is the secret God told Daniel?  Why was it important?  Daniel is the young man who was taken from his country as a prisoner of Nebuchadnezzar and became one of the wise men. Nebuchadnezzar, the King, used wise men, astrologers, and magicians to explain mysteries for him.  This time Nebuchadnezzar had a dream. When the wise men could not explain the dream, he condemned them to death!

Daniel said he could explain the dream and not to kill the wise men.  Daniel prayed to God for the understanding of the dream. Daniel had faith in God.  He believed in God.  Daniel didn’t frantically beg God – He praised God.  He told all that God can do in his prayer of praise. God told Daniel the secret of the dream.  Daniel 2:31-45 tells the secret Daniel told the King.

Daniel understands God knows all, and we cannot know all.  Daniel praises God first. He thanks God for wisdom and strength.  God answers our prayers.  Daniel asks his three friends to pray with him – Shadrack, Meshack, and Abednego!  From Daniel, we know whom to go to first! We will trust our Lord God for all things.

He reveals deep and mysterious things and knows what lies hidden in darkness, though he is surrounded by light. I thank and praise you, God of my ancestors, for you have given me wisdom and strength. You have told me what we asked of you and revealed to us what the king demanded.” Daniel 2:22-23