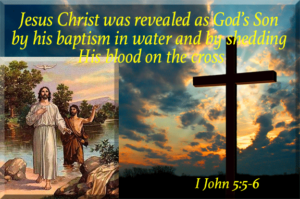 And who can win this battle against the world? Only those who believe that Jesus is the Son of God. And Jesus Christ was revealed as God’s Son by his baptism in water and by shedding his blood on the cross—not by water only, but by water and blood. And the Spirit, who is truth, confirms it with his testimony. I John 5:5-6.

Will evil conquer the world?  Often we see the effects of evil around us. We wonder how we will survive. It seems hopeless as we observe corruption of men’s souls with debauchery, lies, and intrigue to destroy.  It seems hopeless unless we believe Jesus is the Son of God.

Jesus was given all the authority over the all the world. What did Jesus do with His Authority? John 13:3-5 – tells us – Jesus knew that the Father had given him authority over everything and that he had come from God and would return to God. So he got up from the table, took off his robe, wrapped a towel around his waist, and poured water into a basin. Then he began to wash the disciples’ feet, drying them with the towel he had around him.

Jesus taught us to love one another, and He became as a lowly servant and washed the disciples’ feet.  Actions often speak louder than words. Humility, no matter what place we have in life, is a testimony of the teaching of love.

The three witnesses of the authority of Jesus – the Spirit, water, and His blood unify the completeness of authority.  Human testimony is often capricious.  Changing with the wind, and we believe humans, rather that the steadfastness of the testimony of Jesus? Jesus is our forever Savior and Lord.  Who do you believe?

So we have these three witnesses— the Spirit, the water, and the blood—and all three agree. Since we believe human testimony, surely we can believe the greater testimony that comes from God. And God has testified about his Son. I John 5:7-9.