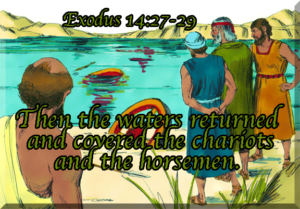 And Moses stretched out his hand over the sea; and when the morning appeared, the sea returned to its full depth, while the Egyptians were fleeing into it. So the Lord overthrew the Egyptians in the midst of the sea. Then the waters returned and covered the chariots, the horsemen, and all the army of Pharaoh that came into the sea after them. Not so much as one of them remained. But the children of Israel had walked on dry land in the midst of the sea, and the waters were a wall to them on their right hand and on their left. Exodus 14:27-29.

In the aftermath of our ‘Red Sea Journeys’ in life, the lessons learned bring us the understanding of Who God is.  But, as it is written, “What no eye has seen, nor ear heard, nor the heart of man imagined, what God has prepared for those who love him”. I Corinthians 2:9.

It is when we know without a doubt God IS, and loves us, we understand His Grace with certainty.  How is it possible God redeems us when we doubt His plans for us and His great power to bring it about?

The Children of Israel saw the great work the Lord did and believed.  I believe above a storm the smallest prayer can still be heard…

Your way, O God, is holy. What god is great like our God? You are the God who works wonders; You have made known Your might among the peoples.  Psalm 77:13-14.