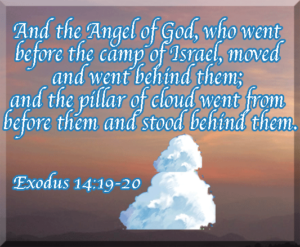 And the Angel of God, who went before the camp of Israel, moved and went behind them; and the pillar of cloud went from before them and stood behind them. So it came between the camp of the Egyptians and the camp of Israel. Thus it was a cloud and darkness to the one, and it gave light by night to the other, so that the one did not come near the other all that night. Exodus 14:19-20.

The sight of a cloud or a pillar of fire signified the presence of God.  And in this case, the cloud separated the children of Israel from Egyptian soldiers.  Darkness continued all night. The soldiers were unable to attack the Israelites.

Moses stretched out his hand over the sea and the waters divided.  God used His creation of the Sea and Wind to make a Way for the Israelites to escape certain death.

Will God continue to protect His Children? For the grace of God has appeared, bringing salvation for all people,  training us to renounce ungodliness and worldly passions, and to live self-controlled, upright, and godly lives in the present age,  waiting for our blessed hope, the appearing of the glory of our great God and Savior Jesus Christ.  Titus 2:11-13.

Then Moses stretched out his hand over the sea, and the Lord caused the sea to go back by a strong east wind all that night, and made the sea into dry land, and the waters were divided. So the children of Israel went into the midst of the sea on the dry ground, and the waters were a wall to them on their right hand and on their left. Exodus 14:21-22.